Eureka Secondary School
Hispanic day is the National Day of Spain. It is celebrated on the October 12th marking the date of Columbus' arrival in the new world in 1492. Nowadays its a celebration of all thing Spanish. To mark the day, watch our short video featuring some interesting and fun facts about Spain! Read more about Hispanic Day at https://www.officeholidays.com/holida...

We were delighted to welcome Sacred Heart School Drogheda to Eureka this week for a special Senior Spanish Debate. The Eureka team comprised: Aoife Flanagan, Rosie Flynn, Amy Tobin and Emma Smith. The girls performed brilliantly and ensured that we won the inaugural North East Schools Spanish Debating trophy. Special thanks to school management, Regina, Hilda and the Caretakers for all your help in organising a thoroughly enjoyable morning for both schools. We look forward to defending the trophy next year and to bigger and better achievements in the National Debating Competition in September. Teacher: Mr McKee

First Years visited the Spanish Embassy as part of our Spanish studies. The girls learned flamenco dancing, did quizzes, listened to Spanish music and tried Spanish food including Paella and Tortilla Espanola. A big double decker Spanish 'Party bus' brought them up and down on the day. Teachers: Mr Gray & Mr McKee 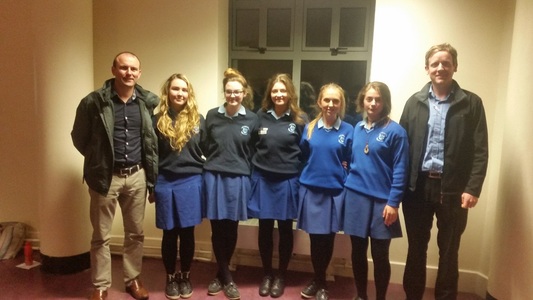 Following impressive wins over both St. ​Columba's and Belvedere College, the Eureka Senior Spanish Debating Team have now qualified for the next round of the national competition. The team are: Kate Abell, Aoife McKeever, Megan O'Kelly,Danielle O'Keeffe, Rosie Flynn and Aoife Flanagan. ​The teachers working with the students are Mr McKee and Mr Gray.